At the end of February 2021, the S-100 project was informed of some special operations due to be carried out in a collaboration with the Norwegian Coastal Administration, the Port, the Agent, the Shipping Company and the crew of the vessel Pioneering Spirit. The main parties included the shipping company, AllSeas, and the Norwegian agent for the shipping company, Johan Seim, from the company Bergen Agent.

The Project contacted Johan Seim to identify whether there could be interest in our participation with tools, data and resource personnel in connection with planning such a maritime operation. Johan Seim presented the Project and initiative to AllSeas who noted their interest and requested to see what the Project could contribute with regards to the assignments in Kristiansand and Stavanger.

Objectives for the S-100 Project

Illustrate and visualize possibilities and limitations with more detailed depth data in relevant areas with small margins, in conjunction with the vessel model and functionality developed in the S-100 Demonstrator. One main goal was again to show the usefulness of such a tool with S-100 data during a collaboration meeting between key players in a maritime operation, and to get concrete feedback on which areas this can create value. Therefore, the project wanted to participate, and learn more about the preparation and planning of maritime special assignments.

The model of the vessel has proved to be very useful for both the visual perception of those involved in such operations and, not least, in terms of showing the operation to other stakeholders.

The Project gained access to the model via AllSeas, and was adjusted by KDI who has special expertise with 3D models.

The first time the model was shown in the waters of Kristiansand, was in connection with an operational test for historical voyages. During this meeting, key parties were gathered, and the feedback was clear from the Chief Pilot, Geir Henning Eikeland, that they wanted access to use the S-100 Demonstrator, depth data and the project’s expertise in connection with planning, preparation and review in the upcoming maritime operation in Korsvik; 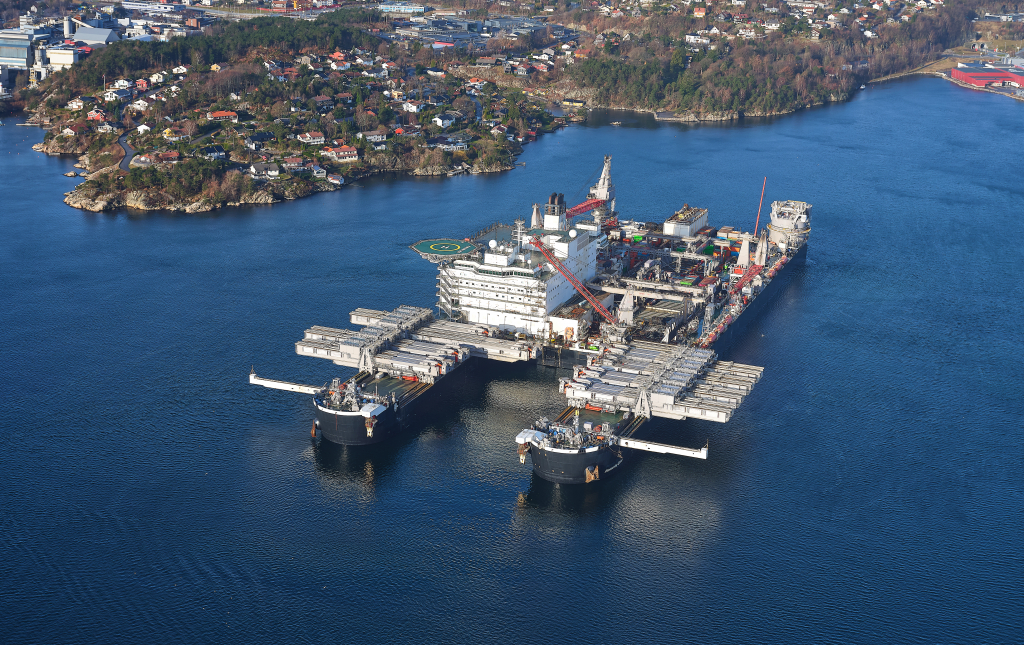 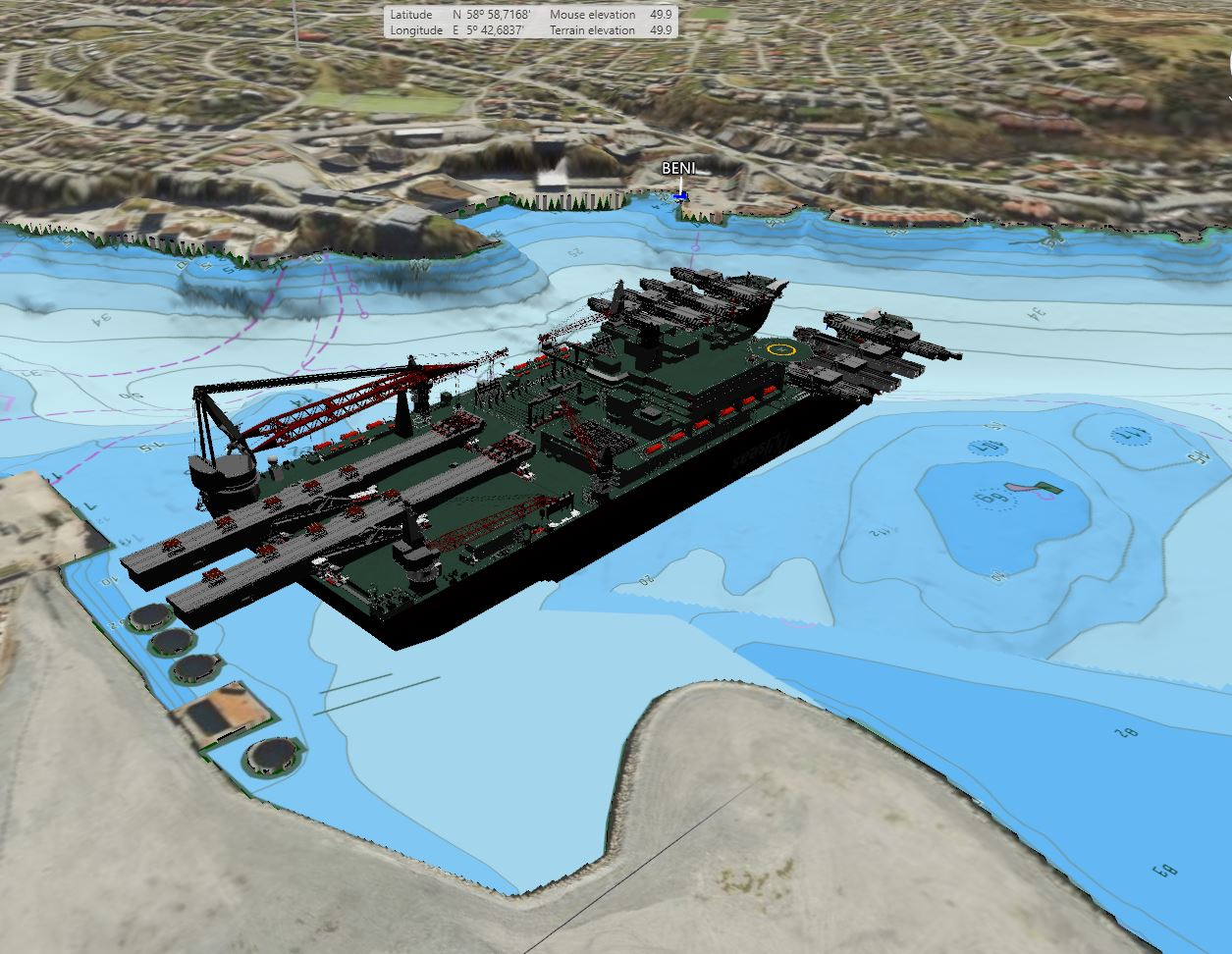 In addition to this operation at Rosenberg Verft, the project also had a resource person available on duty at Kvitsøy VTS; Traffic manager Asle Njåstad.

Asle has given the following feedback to the project:

“I was on duty when the Pioneering Spirit went from Åmøyfjorden to Siden / Rosenberg. Throughout this process, I used the S-100 demonstrator in addition to C-Scope from Kongsberg.

The advantages of using the S-100 Demonstrator and S-102 data in this case were: 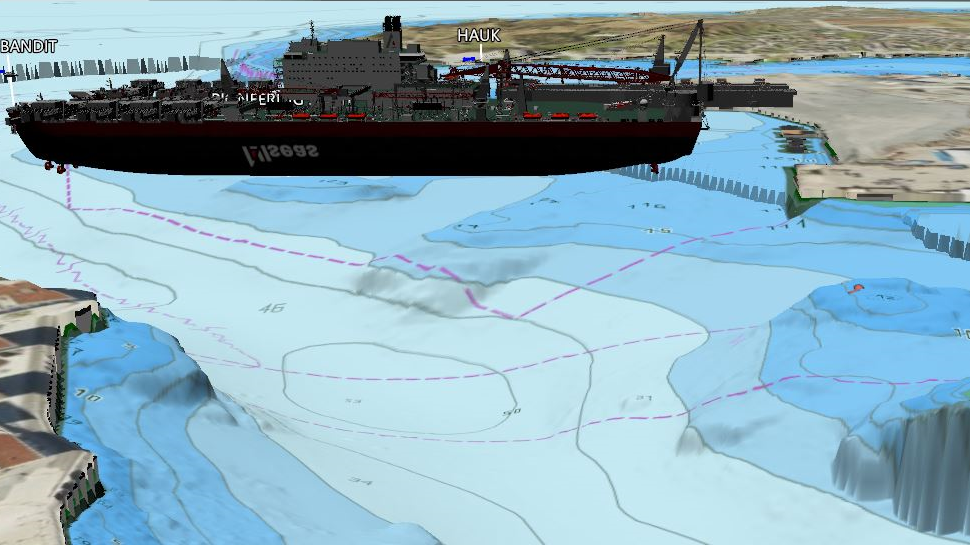 Conclusions, results and the way forward…

The picture below does not look so revolutionary for most, but for the project that has worked mainly with S-102 data and development of S-100 Demonstrator, with suitable functionality for several users in maritime operations, it is a milestone to see these systems taken out on the bridge of a vessel like the Pioneering Spirit; 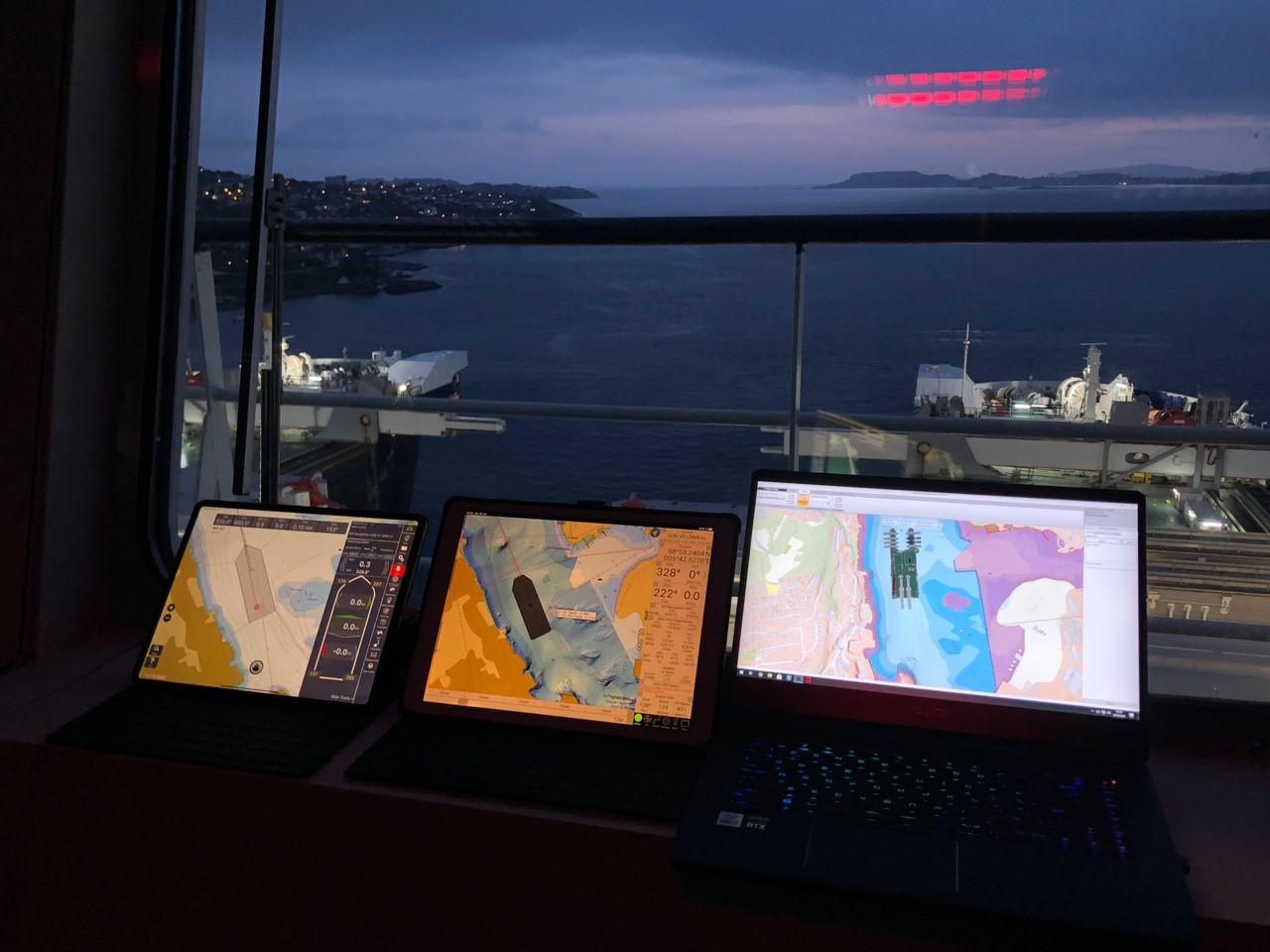 The two systems on the right are at the research and test stage, and the road there – out to this bridge has been long and has involved many people / parties. Although, as it appears in this report, the work has been intensive in May and June 2020, years of work are ahead of us to have reached such a goal.

It is also important to emphasize that pilots with their operational system on the left, and not least their expertise, could have done the operation without the project’s presence.

However, feedback from those involved is that the work carried out by the project, the results obtained and the values ​​with the new data type for depth data, in interaction with functionality developed in S-100 Demonstrato, are strongly desired especially in preparation and planning work for maritime operations. Simulations made in connection with the operations with Pioneering Spirit have strongly supported this.

In connection with the planning meetings for the operations in Kristiansand and Stavanger, small adjustments were made for the positioning based on a new visual image of relevant areas for operation. These adjustments were very small, but can help make an incredible difference to the safety of such an operation for everyone involved. The opportunities created to make these adjustments are then based on gathering the expertise of people with different experience, knowledge, background, needs and understanding into a visualization that enables everyone to see their interests, opportunities and limitations in a simple, safe and secure way – and not least discuss this with the entire chain so that all their interests are taken care of and secured.

Project manager in AllSeas, Hans Hoogendorp, exclaimed excitement already at the first showing of the S-100 Demonstrator in the planning meeting for Kristiansand, Korsvik – and wanted the tool / service adapted to the web for more people;

“BEAUTIFUL !!! Online it will be beautiful! ”

Coverage in media (Norwegian text only)