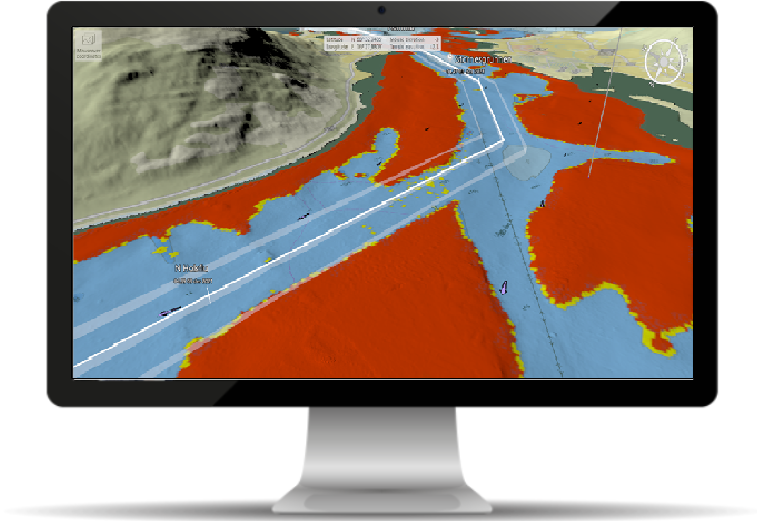 “The S-100 demonstrator gives all the information I need in one place, so it gives added value to assist me in my area of responsibility”.

For this test the intention was to produce several products built on the S-100 Universal Hydrographic Data Model, and use them together in one application during a commercial voyage in confined and challenging waters. The main intention was to demonstrate the advantages of using compatible S-100 products in navigation planning and voyage execution processes, with an emphasis on the S-129 Under Keel Clearance product.

The test was separated into 4 phases:

Phase 1 – Data Production
Several products were created, involving production of S-101 (conversion from S-57) by ECC, S-102 and S-111 by NHS and S-129 by OMC International. The following table shows the different data products that have been used:

The flow of data from producer to end user, through PRIMAR as a service provider, was demonstrated. Facilitating support for the S-100 Data protection scheme using the PRIMAR Remote Update Protocol was a key element, creating secure and user friendly connections directly in the end user application (S-100 Demonstrator) for direct access to the data. It was also demonstrated how S-100 products such as S.102 and S.111 could be used as input data in the creation of S.129 and how S.129 updated plans produced at 1 minute intervals were automatically downloaded and made available in the S-100 Demonstrator application.

The S-100 Demonstrator application was further developed with new functionality to use and display S-101 (through WMS API), S-111 and S-129. Various interaction functionality, like turning on/off information were developed. One example would be the ability to turn off route and control points in dividually in teh S.129 product to avoid clutter in display of the data.

In addition to support of the mentioned products, an automated update integration of the predicted water level datastream was also developed.

The test execution consisted of two parts. One was to determine the S-100 Demonstrator, with the S-100 products, usability for the voyage planning process, the other to determine the usability in the voyage execution process. In the days before voyage execution S-129 plans were produced regularly, using daily produced S.111 products and updated water level predictions in the calculation and production of the S-129 products. The plans were assessed by the Pilot and designated training personnel. The test took place on the vessel Tern Ocean, owned and operated by the company Terntank, and the vessel Captain and crew were informed of the project and test requirements in the week before the voyage execution.

On the day of the voyage, Tern Ocean was boarded with a Pilot boat at approximately 0930. Upon boarding, 4 individual computers were assembled and used to run the S-100 Demonstrator application. Pilot plugs, positioned on the bridge wings, ensured that a position accuracy of 1cm was achieved. During voyage execution the Pilot used the S-100 Demonstrator as a navigation support system, in addition to the vessels navigation system, and the Personal Pilot Unit (PPU) SEAiq. Designated personnel also used the S.100 Demonstrator recording the voyage and demonstrating the capabilities for those of the crew members on watch. When leaving the designated test area, there was interaction with crew members gathering feedback on their views of the S-100 Demonstrator capabilities and the different layers of S-100 information. Upon completion of the voyage execution, all involved companies were given individual surveys to capture their feedback and experiences from the test participation.

As an addition to the 4 main phases, a trial of the PRIMAR RTZ service was also conducted. The Norwegian Coastal Administration is in the process of providing a number of reference routes for Norwegian waters. These routes are made available in the PRIMAR service, giving the opportunity to deliver both ENCs and routes to end users in one delivery. During the test Tern Ocean’s Navigation Officer accessed and downloaded several routes covering the Tjeldsundet area from the PRIMAR system. One route was selected and loaded into the vessels navigation system (Transas ECDIS), simplifying the route planning process.

Below is the description of goal accomplishments for the targets of the test, and for the expected outcomes that were envisaged prior to the test. The results are summarised below each target.